Well! Yesterday just after the blog was posted, a blue hole opened out of nowhere and drifted over us. There was enough of a breeze to generate some wave. Mike and Steve soared up to the low 7000's in the K21. Richard got the Discus to the upper 7000's. Howard and Rob were in the DG1000 and made 8000 in the Braemar area. We all had fun getting back just before sunset when the gaps suddely and rapidly closed beneath us. But all down safely so all was well.

Today, Friday, was a better day with a moderate NNW wind blowing. Graham set off early in the Discus and got up to 13 or 14k before being called down. Everyone flew today. Some more successful than others. I swiped SH4 at lunchtime and had an entertaining flight. Towed to almost 4000 feet and still failed to find the wave. Fell down to 1500 feet on the ridge, clawed my way up to just over 2000 feet, then managed to thermal up to cloudbase at just over 3000 feet before connecting with the wave again near Ballater. At 7000 or so I pushed west to Braemar and to the NW of there climbed again all the way to FL195. Fun fun fun!

Now all the gliders have been derigged and ready to begin their long haul home to Lasham. This evening we plan to have fish and chips at Ravenswood.

Howard took this exquisite shot of a lenticular in the Braemar area yesterday: 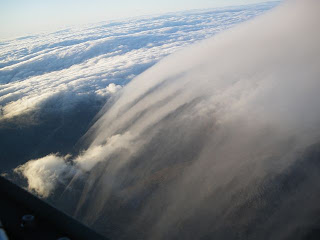 I managed a 100 degree panorama as Richard and I were headed Eastwards back yesterday. There was a hole near the horizon 2km NNE of the airfield through which we safely slotted.

Congratulations to all those who had successful badge flights, and to a successful expedition. Here's to next year.

On Monday at Aboyne it was a rather calm day. Rob Ward got cleared by Colin to go solo in 431. It was a quiet day though. Perhaps a few thermals for an hour or so. Mike walked to the summit of Lochnagar while about 5 others did the circuit around Loch Muick. In the evening Howard cooked a delicious chili concarne meal back at Ravenswood.

Tuesday was totally unflyable due to persistent low cloud obscuring the local ridges and intermittent rain. Again little wind to shift things through. Much tea drinking to be had. In the evening we went to an Italian restaurant in Ballater.

Wednesday was another cloudy calm day but atleast this time it was dry with chinks of occasional sunchine. Some curious lenticulars early and late were 'fools wave' but had Dave tempted anyway. It was mostly unreachable. Several flights were had though in the fairly calm and still air. Colin and Dave did have fun attempting to ridge soar the south side ridge in near nil wind. In the evening we went to the Boat Inn.

Today, Thursday, yet another calm day presented itself. Started wet, but a small gap teased us for a short while before a cold front started to move in. Not looking promising this afternoon. Drank more tea. Currently we plan a cook in this evening and Ballater fish and chips tomorrow.

Tomorrow holds some final desperate hope of some northerly wave. The soundings suggest up to 20kts from the north but the Bracknell synoptics look rather calmer. So let's hope for a blend that will mean we can launch and have one last climb in wave before we head home again.

Finally a couple of pictures. See if you can supply a caption to this picture from Sunday: 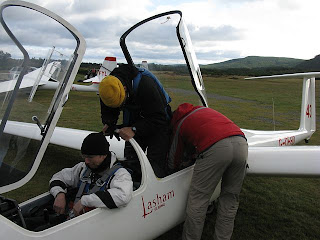 Here is a 2 shot panorama that Mike took somewhere above Morven on Sunday:

In the interests of maintaining my tradition at Aboyne I managed to arrive 12 hours after everyone else so I thought I would carry on that theme with the Blog.

Having driven overnight I arrived at the airfield to find the local pilots trying to decipher the conflicting weather data from the Internet. We all decided that mark one eyeball and watching what was happening to the sky would be a better indicator. After an hour of watching the wave slot over the Lochs (Lakes) the first radio call of someone at 9000ft caused a bit of a rush for launches.

To cut a long story short the wave over the Dee valley stayed all day allowing Graham Bell to get to 20,000ft for his Diamond Height. Mike Rubin and his P2 also went to over twenty thousand.

I also went up to FL 195 West of Braemar with Dave Williams in the back seat of the DG 1000 as my safety pilot. While we were still climbing at 4 knots we both decided that we might have exceeded the service ceiling of our oxygen set up by a few thousand feet and it was time to go down. Lesson learnt and I will take the facemasks instead of cannulas next time.

Colin
Posted by colin watt at 03:33 No comments:

Rain, bleaaaargh! (Or depending on your viewpoint, A rest day, thank goodness!). So with a clear indication that the weather was not going to play ball, the well-oiled machinery that is the social whirl of Lasham expeditions swung into action. Sub expeditions were launched to the distilleries of Northern Scotland, and The McDonalds in Aberdeen.

For the evening, an expedition meal was prepared, and despite the Floyd-like alcholic tendencies of the cooks was finally delivered to universal acclaim.

Today we threw the gliders willy nilly into the sky, and much to our surprise they stayed there. Bob took the DG to Feshiebridge (and rather thoughtfully brought it back), and then demonstrated to Dave how to ridge soar, extending the downwind leg to Ballater at 1,000'. Derek and Glynn took 431 up to 12,000 + and everyone else just went up high in the marvellous wave, and ............... Pete Clark got GOLD!!!!!, in the DG, so now we are looking forward to a Champagne supper.
Posted by colin watt at 10:07 No comments:

We got up ludicrously early on the promise of wave. We hunted down and cajoled the tug pilots and then launched with gay abandon into the wide blue yonder. Unfortunately the 'blueness' should have been a hint. After retrieving our gliders with monotonous regularity from in front of the clubhouse and then willfully throwing them back into the sky, reality slowly dawned.

Coupled with a typical Deeside lamentable launch rate the frustration levels went sky-high causing one member to eject teddies and himself from SH4 and go off in a huff. Tomorrow's got to be better than this!

The Chinese and Chippie takaways were good.

Frustrations are mounting to the point where arguements regarding spelling and grammar in the blog are achieving pride of place.

Anyway, in the words of Kenny Rogers, 'Some days are diamonds, some days are stones...'
Posted by colin watt at 03:01 No comments: 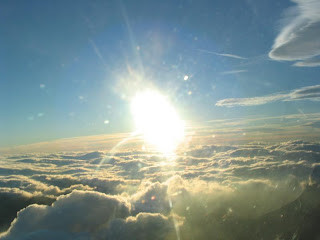 Today's forecast was dismall, rain, low cloud, no wind. So late breakfast, drive to club - find the forecast was correct, so a second late breakfast at the Black-faced sheep. back to the club to find the locals rigging and launching into a rapidly clearing sky, so we did, too.

Paul Barnett (me) in SH4, after a stupidly low release, eventually got to 18000ft and Diamond height. (Oh, and I think the other guys enjoyed the day too)

Then back home to a haggis and Champagne supper (haggis killed and cooked by Bob)
Posted by colin watt at 00:47 No comments: 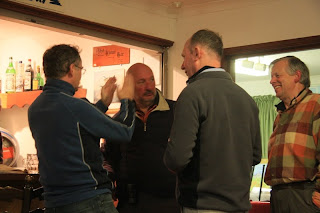 Monday morning, Minus 3 overnight, so a beautiful frosty morning. The weather has gone slack, so no dramatic wave. Okay, no wave at all to be honest. Being from Lasham, a detail like that is not going to stand in our way.

Aboyne's No 1 Pawnee has gone U/S and (surprisingly) they ran out of Puchazs (Puchae?) today. Therefore Bob Johnson ended up instructing in the K21. we also used the DG to go for a little soaring practice, Pete Clark and Bob towed to 1,900 and then climbed to 2,900 (Best lift of the day. Tim Lean and Dave Williams then demonstrated their consumate skill and ability by delaying their return to earth by playing tag with Morven's ridge lift (OK there wasn't any).

Also we went to the Black Faced Sheep tea shop to check out the Tea and Totty, both scoring top marks.

All today's drama
Posted by colin watt at 09:50 No comments:

Having driven north in the wind and rain to find Ravenswood looking suitably gothic we started with a bacon sandwich and a briefing which was longer than usual as there was no power. The sun shone and the wind blew gently from the north west.Graham Bell managed 17,300 from a launch height of 3500. The rest of the team did site checks which we managed to limit to 90 minues or so. Several solo flights then ensued but by then thermals were interfering with wave and despite waiting for them to die away no one stayed up for long. So for a first day, not bad!
Posted by colin watt at 09:49 No comments:

Tuesday was a complete washout. We all arrived at the gliding site just after 9am but it was soon obvious the grey, drizzly, and overcast sky was unlikely to clear.  From the Satellite we could see a long narrow band of grey stretching over Scotland which remained all day. So the hangar doors remained shut.  A few ventured out to Aberdeen. Others stayed in the local area drinking tea. In the evening we all met for dinner at La Mangiatoia, the local Italian restaurant in Ballater. To our surprise we spotted Billy Connolly having a quiet meal in the corner with one other person. I hope we didn't disturb him too much with our 11 strong group of glider pilots descended on the place. 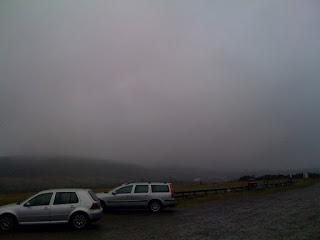 However, Wednesday was complete contrast with glorious blue skies.  We had the hangar doors open at 7:30am, SH4 rigged, and all gliders DI'd ready for what looked like potentially the best day of the week. Only one stalling point, a low lying, ground hugging mist that just wouldn't shift.  We waited, drank tea, waited more, and eventually at midday the mist lifted enough to launch. So much for an early start!!  431 launched first with Dave Parfett at the controls. He managed to climb to 8000Ft before descending.  Then SH4 with Graham bell but somehow he missed the wave and was back on the ground in 20mis.   Alex and John took 776 and climbed to 15000Ft.  Tim Coldicott in SH4 managed 12700Ft.  With not much daylight left, Howard and John took the last flight and climbed to 14000Ft in about 30mins. The vario was against the stop as they climbed between perfectly formed and clearly defined wave bars extending into the sunset.  A great day all round topped off with a fantastic roast beef meal courtesy of Bowtell Farms. 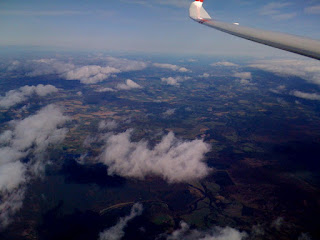 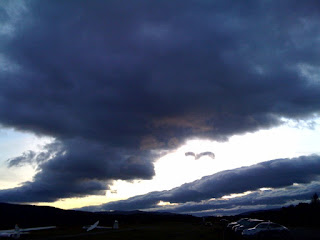