This is what I came for. Words can't describe how wonderful it is. Thanks Bob and John for an awesome week. 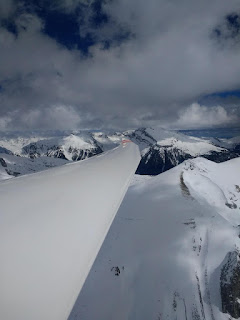 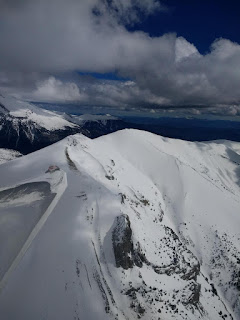 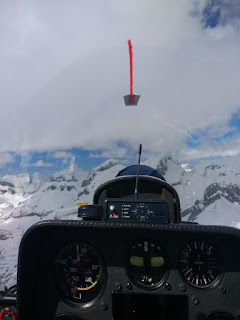 We were lucky enough to have  pilot here practicing for the World Aerobatic Championships. A fantastic 20 min display.

Bob took us on a cultural tour of Jaca. Ended up with 'patatas campanilla' , tapas and the obligatory vino.

Frankie and John Brookes out looking for vultures. Difficult to get photos but they flew at our wing tips. One scathed its head and then flew away.  These crazy humans!!!

Fuel cost ZERO. Only cost was coffee stops for charging. 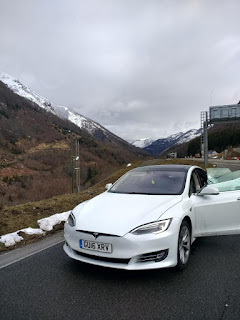 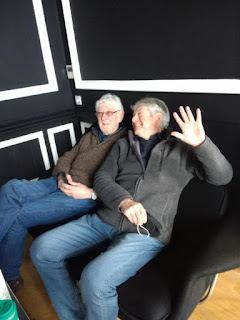 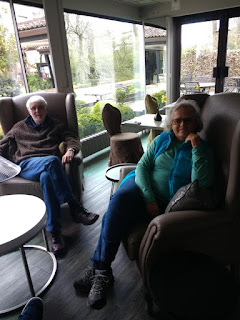 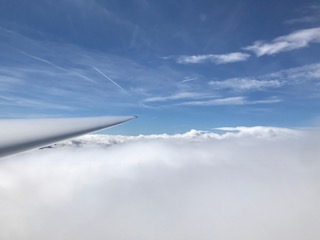 Posted by Frankie
Posted by Merv at 00:45 No comments:

The first day was well, interesting. we did fly but not for long. A sensible retreat due to snow, poor vis and low cloud base. We got the Blundell's  father and son in the air just to make sure they couldn't go home without flying. Three flights and the day ended in a flurry of snow. Tuesday has been promised  a good wave day.
Best thing was lunch my Calamari see pic below, the biggest squid I've ever eaten! Tuesday morning came in cold, very cold with an upper  northerly wind 20kts gusting 30kt. However the surface wind was westerly but just as strong and lively, but strong wave!
David Griffiths and I took off at about 1100hrs an exciting aero-tow up to 3000' above the airfield to the north in the Hecho valley. When the rotor showed more up than down we decided to release. Then battle commenced, first we went up but then the low level westerly wind spilt over nearby ridges and interfered with the northerly rotor, so we moved to the other side of the ridge and got the benefit of both!
Soon we where in the wave but with not much of a view of the ground. I knew it was clearer to the south and had a escape route in mind. Once up at 12000ft everything became easier. We had plenty of ground in view and lots of options to the east. Most of the 2hrs 13mins flight time was spent at 15000- 18000' Our furthest point was Broto and really quite easy. We turned back to give Andrew Blundell a flight. David handled the difficult conditions extremely well and really enjoyed the day. Phil Holland had taken the K21 for a shorter spin for the first flight but got away well for the second flight with Chris Gibson. The second flight in the Duo- Discus was pretty much a carbon copy of the first but now we new the pattern and the air had dried out a little. It was a straight forward entry into the rotor and away in the wave to the east. After 2hrs at -28 degrees C, I asked Andrew how were his feet? "Gone!" He said with a matter of fact air, clearly numb with cold. I took pity as although my feet we as warm as toast curtsy of heated socks! I know how that feels. Inspire of numb feet a good landing in very rough conditions.
Mean while Bill Blundell savoured the delights of the rotor comparing it with being locked in a washing machine spin drier!

An excellent day was had by all including E6 syndicate with Tim Browning and Martin Laver sharing their DG1000T with Merv showing them how its done.

Our last day started damp and overcast and got wetter through the morning. It was mid-afternoon before it started getting brighter with the wind strengthening from the north west. A tiny patch of blue sky appeared over the airfield but not enough to encourage us to go flying as it was still raining at either end of the valley.

Instead everyone paid their bills and then we had lunch at the airfield. Afterwards Merv held a debrief session going through some of the logger traces from our flights.

With no flying in prospect everyone headed off to find a better use of their time whilst waiting for today's main event which was going to be a meal at the Cantare restaurant in Hecho.


Despite not having had unsettled weather we have flown 4 days this week which seemed unlikely at the beginning of the week when looking at the synoptic charts covered with lows and fronts.

Whilst we didn't get to cruise along the main ridge we had some interesting flying with one wave day. Thanks to everyone for making it such an enjoyable week both in the air and on the ground.

P.S. Its sunny outside this morning now that we are leaving...

The sky didn't look that promising this morning as cirrus blocked off the heating and the cloud was low over the mountains. However the briefing was surprisingly positive though the various models couldn't agree whether it was going to rain or snow or which direction the wind was coming from.

So it was a more relaxed start with time for lunch before the high cloud moved away and it was time to go flying. Today it was Allan and Merv in the K21 followed quickly by Charlie and Bob in the Duo, both being launched under a street to the south west of the airfield.

The two gliders went west together heading for the ridge to the north of the reservoir at Yesa. There were already several large showers to the north and south but the conditions were booming for a fast run up and down the ridge.

The gliders parted company with the K21 heading south whilst the Duo came back east getting as far as Stab-another-dingo (sic). The cloud base was now around 7,500' allowing the gliders glimpses of the main ridge.

The showers continued to build in the west so it was time to return for the second sortie before the cloud shadow cut of heating to the mountains near the airfield. Both gliders opted to land downwind to get back in the air asap. Kevin and Bob in the Duo and Keith and Merv in the K21. This worked well but the increasing showers meant that the second flights were a little shorter than planned.

A huge snow shower passed to the north of the airfield with an even bigger one building to the south west. This put the whole valley to the west of Jaca in cloud shadow making for some interesting cloudscapes.


Kevin and Bob in the Duo lingered in some weak lift at the southern end of the Hecho valley before heading back, only to find a strong climb right next to the airfield. They took pity on those waiting on the ground so came back and landed.


The instructors must be tired out as they chose to eat in at the apartment whilst the students headed into Jaca for "a big lump of meat".

Everyone flew today with a total of about 7 hours flown.

Today's forecast was the best so far, though rain showers were expected to be increasingly frequent in the afternoon. The best area for flying was to be to the south rather than into the higher mountains to the north.

It was going to be another day for an early start so the gliders were extracted from the hangar, inspected and pushed down the ramp to runway 27.

Keith and Merv went first in the Duo followed by Kevin and Bob in the K21. Cloud base was over 6000' with good looking cumulus to the west and south.


There was significantly more cloud as the day progressed but it remained soarable so both gliders returned for a second sortie. This time Allan and Merv in the Duo and Charlie and Bob in the K21.

Both gliders were able to get away to the east of Cuculo with the cloud base now over 7,500'. By now the lower mountains to the north were clear enough for Charlie and Bob to explore stage 1 and 2 and then take a peek at the lower end of stage 3. The Duo did another lap of the morning circuit out to the lake at Yesa.


By late afternoon the shower activity increased with a wall of showers approaching from the west. The shadow from the cloud started to cut off the heating so it was time to head back. The Duo was last to land and everything was back in the hangar long before the rain arrived. In total about 10 hours flown in 4 flights, our best day so far.

The group were spared the instructors attempts at cooking as Toya had invited everyone for dinner. An excellent chicken chillindron this year and not the usual lamb which was enjoyed by everyone.

We have been promised that there will be no rain tomorrow...

With a front approaching from the south west, there was a bit more urgency for an early start on Day 3. The gliders were on the runway and ready to launch before the briefing, which confirmed that there would be a short wave flying window before it started raining. Although the surface wind was easterly, the upper wind would be west of south giving the possibility of wave.


Each glider explored the wave system looking for stronger lift. The Duo headed east getting to about 10,000' near Stab-another-dingo (sic) whilst the K21 loitered just downwind of Cuculo getting to 11,200' before the gaps between the clouds started to close, signalling the collapse of the wave.

All the gliders descended safely over the main valley without any problems and managed to get the gliders away before the rain started. Unfortunately this meant that there was only time for one sortie in each glider today so Kevin and Keith will fly first tomorrow. Just under 4 hours total flying time today.

After another fine airfield lunch we headed off to do something more useful with the afternoon than watch the rain come down. Mike made his famous scones and supervised the preparation of the apple and strawberry crumble.
Dinner tonight was Merv's Spaghetti Bolognese followed by the crumble with Luis and Serge as our guests.