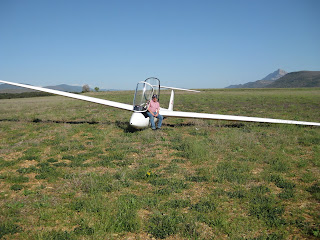 Another flying day, five out of five so far this week, high pressure conditions give a late start which allows time for lunch and a siesta. Weakish thermals on the first step allowed the group to put into practice the skills learnt on the first days. This led to some interesting flying and a scuttle home from behind the hill. As the day died one scuttle was converted to a “running out of height exercise” which was changed to an “oh dear, we have run out of height” and an outlanding 1km short of the airfield. Useful practice in derigging and rigging a K21 left us ready for dinner. Gerald will be feeling better soon.
Posted by colin watt at 04:10 No comments: 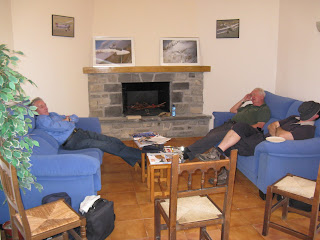 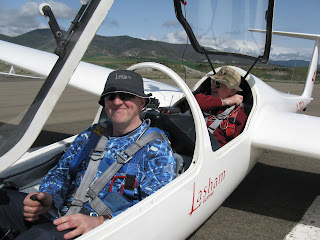 Week Five Day Three Sunny and warm! Thermals started popping at 14.00 and Lasham launched. The day was spent mostly bouncing about on the local hills, honing the skills required to attack the high mountains. Chris and Harry considered their skills sufficiently honed so headed north, met large rocks and couldn't understand why “ get closer!” kept issuing from the back. It took a while to get their smiles to relax to the point where they could start talking again. The Turbo Tourists (another Duo from Lasham) proudly announced that they were passing 8000ft AND hadn't used the turbo at all that day. The day ended with Spag Bol at Chez Bob but Gerald is feeling better now.
Posted by colin watt at 04:17 No comments: 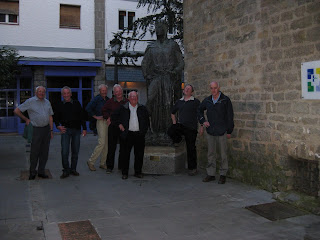 Week 5 is Tuesday over and over again! TM and JD are introducing a much needed element of culture sadly lacking in previous weeks, we have been to the Biaritz twice already. The flying is not bad either. Monday was a day waiting for a frontal passage with weak lift, only one flight lasting more than an hour. Tuesday started warm and sunny but we managed five and a half hours in total with four students all exclaiming that it wasn't like thermalling at Lasham! The rest of the week is set fair. BJ
Posted by colin watt at 23:33 No comments: 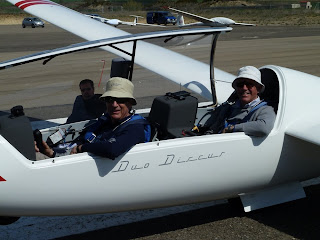 The final day. The customary dinner at Toya's had been enjoyed by all, and so most took a while to wake up. However the hesitation may have been caused by the high cover and the southerly wind then south-westerly, then south-easterly and then any other direction it could come up with. The uncertainty about the wind direction caused the management to launch the single-seaters into wind but uphill to the east, while launching the two-seaters downwind and downhill to the west. After 775 just cleared the bushes at the far end of the airfield, they launched all the next few gliders from the other end.

431 went off above the snowy bits to the dam to the east of Retona reaching 10,000 feet. 775 explored the local wave to about 8800 to begin with and then realised there were some thermals about. It then hurtled off to Ordesa and back. 431 struggled to land in air that was rising everywhere except on the downwind leg. You can see why they suggest starting the circuit at 1000 feet above the airfield because there was a long spell of 8 down when 431 was going downwind resulting in a rapid shift in the circuit pattern before a normal landing.

As is usual after two great flights, conditions worsened while the next two punters were being strapped in. The high cover had moved in blocking the sun from the lower mountains but leaving tantalising cumulus in the high Pyrenees. Sadly even a tow to Stage 2 was insufficient for 431 to find lift and gravity won. However the later launch of 775 and the knowledge gained about the wave in the first flight enabled them to hang about for a while and then to climb gradually in the wave to 8500 and give Paul a good long flight.

The second mass dinner at the airfield restaurant with the Finns was enjoyed by all. Many thanks to Crystal for serving 17 of us single-handed.

Next week's batch have started arriving already, seemingly mystified that we haven't cleared off as soon as we landed.
Posted by colin watt at 14:02 No comments: 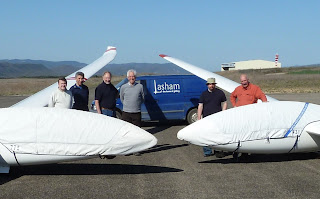 What a fantastic day! JM Tours took two people to the Ordesa Gorge and on the second flight across the lake at Yesa. Cloud-base was 10,000 feet and this was only 1st April. Truly stunning so sign up for next year to avoid disappointment. I have to admit to being slightly pi**ed after the traditional dinner at Toya's. Zoccos and red wine have a strange effect on someone's ability to blog coherently. BJ had a strange experience when flying with an unnamed member of our party which should be told in his own words.

BJ writes:
That's not what I meant! BJ flying with PH, PH to do the flying, BJ to do the release as PH has problems reaching yellow knob. Aerotow towards home hill passing 4000ft passed through turbulence PH adjusts aeroplane and says something. BJ wakes up and pulls release. PH says I said S**t, sorry said BJ thought you said release. By now we are in it! We land 10 mins later, regroup and then bounce up to mountains as if we meant it. So five flights, four visits to mountains and still one more day to go!

JM:
Next blog will be sober. (That will make a change)
Posted by colin watt at 13:48 No comments: